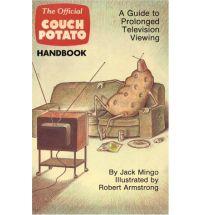 Meaning – to be a lazy individual / to have a sedentary life-style. This idiom conjures up an image of an overweight person sitting in front of TV eating crisps and junk food.

In Context – I’ve had such a busy day today. All I want to do this evening is be a couch potato.

Origin – Robert Armstrong, Jack Mingo and Allan Dodge coined this term in the 1970’s. They published a satirical book called, ‘The Couch Potato Guide to Life – Better Living Through Television’.

“If you have a comfortable life then you’re going to become a nice sort of couch potato, and just take it in and be brain dead.”  Eric Khoo

“You can’t go from couch potato to the Olympics. There’s an incredible difference between us as average human beings and these extraordinary performers.”  Debbie Wilson

“I’m a couch potato. I love to stay in and just watch a DVD with the missus. Or we all go over to Louis’s house and watch ‘X Factor.” Zayn Malik

Idiom – To Crack Someone UpIdiom – The Ball Is In Your Court