Meaning – something which is said in an unofficial capacity or which is not to be repeated .  This idiom is often used when the speaker prefers to remain anonymous (doesn’t want to be known).

In Context  – Journalists often find people to speak off the record for their articles.

Origin –  This phrase is first attributed to Roosevelt in 1932.  In English,  ‘record’, can be used to mean to take an official note of something (e.g. birth / marriage records). 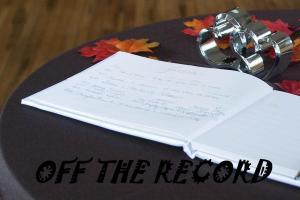 Collocations – to keep something of the record, to remain / stay off record

Quotations with ‘off the record‘

With the press there is no off the record.  Donald Rumsfeld

I will only speak off the record about Debra Winger.   Karel Reisz

The second thing I’m confident we’ll get done next year is immigration reform. And since this is off the record, I will just be very blunt. Should I win a second term,… Barack Obama