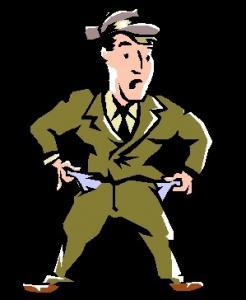 Meaning – to be out of money, not having any cash.  Use this idiom when you want to express that someone can’t afford to pay for something.

Origin – ‘to be broke’ is an idiom which uses an old form / meaning of the verb.  The verb ‘to break’ formerly also had  which used to have an additional meaning of to make bankrupt.  After the Renaissance, it was customary for bankers to lend money to customers in the form of ‘borrowers tiles’.  These small, porcelain tiles were marked with the customer’s name and credit limit.  When customers went over their limit, the tiles were broken.

Similar Idioms – to be skint, to be short of funds or to be low on cash.  We may also say things are a little tight.

QUOTES WITH TO BE BROKE

“Well, I’m still here. Didn’t have to go to rehab, and I‘m not broke.”  Jimmy Buffett

“It was the early 1970s and I was recently divorced. I had three kids and was totally broke. I managed to find work back east on the straw-hat circuit – summer stock – but couldn’t afford hotels, so I lived out of the back of my truck, under a hard shell.”  William Shatner

Similar Idioms – to go for broke.  This idiom means to risk everything (to the point of losing all your money).  He put his life savings into the investment and went for broke.

Idiom – Worth Your SaltIdiom – Rule Of Thumb