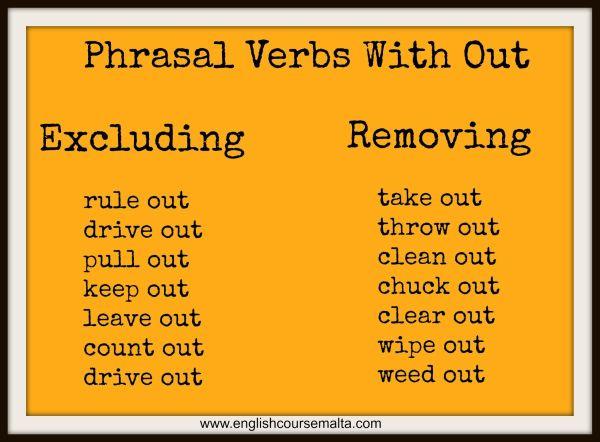 Using Phrasal Verbs or Multi-Word Verbs can be a tricky business. There are also so many, that learning them might seem like climbing a mountain. However, when you find out (discover) that many phrasal verbs have similar meanings, the list you need to learn gets a lot shorter.

Organising PHRASAL VERBS into categories is a useful method as it will help you to categorise them into groups of meaning and remember them more easily.

take out (of) – Meaning: to remove. Although this phrasal verb has many meanings, one of its most common is the physical or literal meaning. For example: She took her glasses out of her bag or she took her glasses out.
throw out or chuck out – This is what we typically do with rubbish or trash. We throw out or chuck out things we no longer use or want. These 2 phrasal verbs can be split. So you can say, chuck it out or chuck out the rubbish. Synonymous Phrasal Verbs: get rid of, throw away.
clean out – When something is so dirty or messy that we need to empty it completely to clean it or tidy it up properly, we say we cleaned it out. This is another example of a phrasal verb than can be separated from its preposition. Example: I cleaned out the cupboard or I cleaned the cupboard out. Synonymous phrasal verbs = clear out
wipe out – Meaning: to erase something that is written. This verb is often used by teachers to refer to cleaning the whiteboard or blackboard. For example: She wiped out the explanation and started a new topic. You can also separate out from the verb. For example: She wiped the explanation out.

keep out – This means that entry is not allowed or permitted. This is a phrase that you will often see on signs. Example: DANGER! KEEP OUT! In this meaning of keep out, the preposition out cannot be separated from the verb. The verb to keep someone (or something out) has a slightly different meaning. It is now used to mean to prevent someone from entering or to exclude a person. For example: He was kept out of the secret because he was such a big mouth.

leave out – Meaning to omit, this verb is used when we want to say that something or someone was not included. This inclusion can be both intentional and unintentional. For example: The children left the boy out of the game because they didn’t like him (also the children left out the boy). Example 2: I have left out some verbs (or left some verbs out) because they are not very common. Synonymous phrasal verbs = rule out or count out.

drive out – Meaning to make something or someone go away. For example: The terrorists have driven out the residents of the village (or driven the residents out). Synonymous phrasal verbs: force out, kick out, cast out, throw out, shut out, send out

pull out – This phrasal verb with out means to stop being involved in something. For example: Serena Williams pulled out of the tennis tournament due to an injury in her leg. Synonymous phrasal verbs: opt out

You’ll find a list below of more Phrasal Verbs with Out (recommended only for Advanced Students of English):